UN Representative of Canada Tables Resolution against Iran and in favour of Baha’is.

(It is not favouring Baha’is, it is using Baha’is) 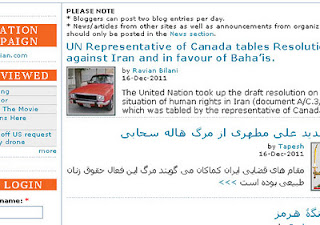 The United Nation took up the draft resolution on the situation of human rights in Iran (document A/C.3/66/L.54), which was tabled by the representative of Canada.  He said that since the draft’s introduction, the human rights situation in Iran had further deteriorated.  The text’s co sponsors did not take the action of bringing a country specific text lightly.  But, given the circumstances in Iran, it was necessary to do so.
The Committee then approved by a vote of 86 in favour to 32 against, with 59 abstentions its third country specific draft resolution. The representative of Iran called the draft text a shameful fabrication, stressing that the United Nations should be the safe refuge of all Member States, not a “playhouse or theatre” for those who claimed superiority over other States.

Using different countries backing them on petty issues, which can be settled within the framework of government itself, is not doing any good to them. The world is coming to know that there is definitely a group of powerful Nations backing and using the Baha’is for their own selfish purpose. Mr. Jaffer from Canada and the Journalist Ms. Asma Jehangir from Pakistan have been used by these powerful Baha’i lobbies to campaign for the discrimination of Baha’is. Such identities have become well-known now in the political stage. Their presence, letters and speeches have become too predictable.
The internet has provided the scholars and foreign affairs experts of each country with tons and tons of materials to do research on the subject of Baha’i-Zionism relationship. If these backing and support of the pro-Zionist countries continue,  then surely the balance will not be in  favour of Baha’is. A common simile, would the childhood story of “the lion has come…. the lion has come…”. Surely the lion is actually absent in most circumstances and truly present (read as Zionist-Imperialist-Colonialist countries) when and where people do not know.
The Baha’i Faith is presently banned not only in Iran but in other countries like  Iraq, Egypt, Korea, Indonesia, Saudi Arabia, Germany. The Bahá'í Faith was banned in the 1970s in several countries: Burundi, 1974; Mali 1976; Uganda 1977; Congo, 1978; Niger, 1978. Political experts world-wide are gradually becoming aware of this.
With this trend, the next round of balloting can be expected to voted 50 in favour and 127 against. There could be more countries having restrictions on Baha’i activities. Indeed the day is not far when even propagation in the US will be banned just as in Israel. Watch out!!

By Ravian Bilani
As appeared on Iranian.com
Posted by John F at 01:24 No comments: